My Personal Experience with Trans-Rectal Ultrasound MRI Fusion-Guided Prostate Biopsy: A Guide of what to expect after your prostate biopsy.

Since 10 years ago, there is a lot more information on what to expect after your trans-rectal ultrasound (TRUS) prostate biopsy.  Back then, many websites omitted some key side effects, such as blood in your ejaculate.  Even some very reputable health and medical websites buried things like the possibility of serious infection or sepsis as a small bullet point.  It turns out, this is a very real, increasingly likely and possibly fatal complication.  Urinary infection or inability to urinate are also possible complications.  Urinary incontinence and erectile dysfunction are less common risks.

Of all the potential side effects, I was most shocked 10 years ago when my semen looked like thick blood because it wasn’t on my care sheet or mentioned by the medical staff.  So, I created an article back then to help others that generated over 600 comments. Please feel free to reply with your experiences as a comment after this article, you are welcome to use an anonymous username and email. Thankfully, more websites and care sheets acknowledge blood in the semen now compared to a decade ago.   This is good because if you aren’t expecting it, you might think you have a serious bleeding issue or internal hemorrhaging.   You aren’t. Opaque red or rust-colored ejaculate is not unusual after a prostate biopsy and can last a month or longer after the procedure, hopefully diminishing over time and number of ejaculations.  Even my doc, nurse and care sheet mentioned it this time, unlike 10 years ago. 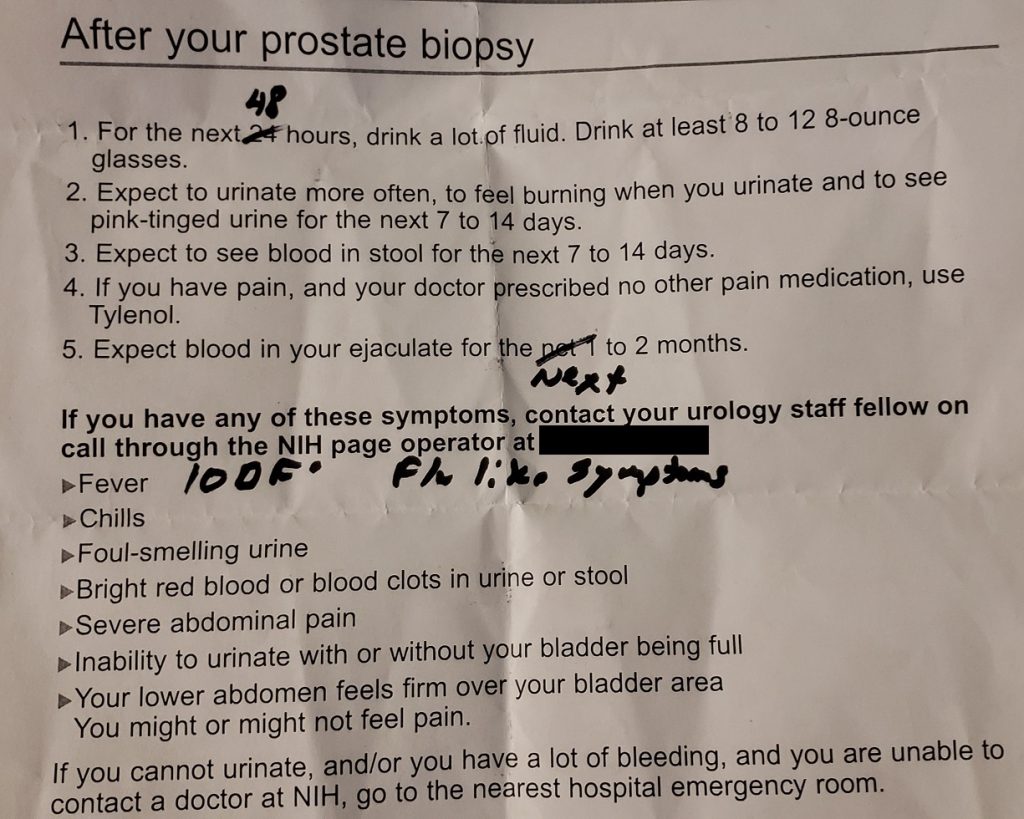 This new care sheet is pretty good based on my experiences.  Here is another reasonable webpage more centered on the risks, except that “…you also may see traces of blood in your semen” doesn’t come remotely close to describing it for some men:

How common is hematospermia (or hemospermia)?  One report indicated that various studies showed that between 5% of men and 90% of men had blood in their semen after a biopsy.  When eliminating men who did not ejaculate after the procedure, they found about 90% had blood in the semen that lasted around 4 weeks and 6 ejaculations after the procedure.  A similar study had very similar results.  As you can see in these studies, it is not all that uncommon to have blood red semen, rather than having a tint or “altered color.”

I’m going to discuss my own, personal recovery experience following my second TRUS guided prostate biopsy, done under local anesthesia.  It was pretty similar to my first one.  If you are squeamish or don’t like the TMI type of details, STOP READING NOW.  The rest of this article is definitely Too Much Information unless you really want to know from first-hand experience.

I was wheeled into the OR just after noon.  In my previous blog, I wrote more about the biopsy itself. Immediately following the 15-minute procedure (plus 15 minutes of setup time and hours of waiting time), I was wheeled out to the recovery area.  The only requirement for discharge after local anesthesia was to provide 100ml of urine.  I had a full bladder, so I figured I would be out quickly.  As the nurse gave me the collection container and led me to the washroom, she said, “Take your time and use the privacy of the bathroom as long as you need.”  Good advice, because I was having difficulty urinating despite the urgency.

After 5-10 minutes or so, I finally pushed out a rather large and gross blood clot and then was able to fill over the needed 100ml of pinkish-red urine into the container.  My bladder still felt somewhat full.  I hung out in the recovery room for another 20-25 minutes having some juice, crackers and getting dressed.  I was able to pass a little more pink urine and smaller blood clots before I left, but still felt like I had a full bladder.  I also had a small bowel movement, also gross and bloody red. It was around 2pm when I was discharged.

I took care of some phone calls and travel reimbursement and hung out at the NIH for a while as my flight wasn’t until early evening.  I was advised to continue drinking plenty of water, hourly if possible.  The more flushing, the better, they advised.  So I did.  I was able to urinate a little every once in a while, but still felt like I had a full bladder.  This is apparently not unusual, due to trauma and swelling in the prostate. The color was still pinkish and smaller clots were becoming less frequent.  I had another small bowel movement, less red, and with no apparent fresh blood.  There was also dull pain inside my rectum that lasted another few days, not bad, but sitting upright was worse than reclined or laying down.

At this point, I decided I didn’t feel comfortable flying with blood coming out two ways and a bladder that always felt full. I opted to stay the night and changed my flight plans.  I booked a room at the Westin Crystal City, one stop from Reagan National (DCA).  It’s also less than a block from the Metro station, so I recommend it for convenience.  Despite being near the airport, I had no issues with noise, the bed was comfortable and I managed to get a little sleep even considering the circumstances.  If I have to do it again, I would plan on the extra night unless I knew I would be discharged earlier in the morning and had a late evening flight.

It’s now 5 days post-procedure.  I gather the largest risk of serious infection is 1-4 days after the procedure, but there is still a significant risk for the first week, tapering off to a smaller risk for the first 30 days.  So, I’m hoping I’m out of the woods as far as sepsis goes, as that was my biggest worry when they do a trans-rectal biopsy (TRB).  With so many resistant strains of E. Coli and other bacteria around, this is a legitimate worry.  Some urologists now take a rectal swab prior to the procedure to see if you have resistant bacteria in your system.  Thankfully, so far, no infection for me.  Waiting for biopsy results is worry enough!

I don’t know if urologists will do a transperineal biopsy (TPB) on request, but I’ve read there is much less risk of infection for this type of biopsy that goes in through the skin under the anus, rather than from inside the rectum.   In addition, it allows better sampling of some areas of the prostate, such that it’s the preferred method when extra cores saturating more of the prostate are needed. It’s also apparently compatible with the UroNav and presumably other TRUS/MRI fusion systems.  The main downside seems to be that it is usually done under general anesthesia, which isn’t necessarily a bad thing in my experience.  This does usually mean at least one night in the hospital in many cases.   I will seriously consider a TPB in the future if the option is available.

By late evening of the same day as the procedure, my bladder urgency had diminished.  I had been able to urinate more freely since around dinner time, with only very small blood clots and a slightly pinkish color.  By day two, my bladder seemed to be back to normal, though I was still urinating more frequently due to drinking more water.  Even tiny blood clots were rare and the pinkish color was nearly gone.  My stool seemed to have very little or no blood, thankfully.  I had no problems on my delayed 2.5 hour flight.

By day three and four, my urine was normal, with only a tiny bit of blood sometimes at the very end of a stream, when a little more would come out (old-man enlarged prostate syndrome).  Stool also seemed normal.  I was told blood in the urine could last 1-2 days with a lessening pink tint for up to a week or so.  Decreasing amounts of blood in the stool could continue for about a week as well, but I seem to be mostly clear in a few days.  Like last time, semen is a different story. 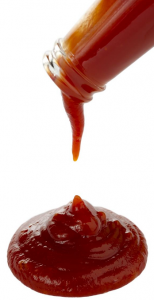 Even having had the procedure before, it is still a little shocking to see your semen come out looking almost like dark, runny ketchup or BBQ sauce.  Most websites seem to indicate to wait at least a few days or up to a week before sex or masturbation. I can’t comment on the medical reasons for that, but I do suggest that you use a condom for the sake of your partner and for your sheets.  Some men report a slight pinkish or rust color or even no color at all, but mine looked like thick, red blood.  If I recall, it was back to normal within 2-3 weeks last time.  On the plus side, like last time, there was no pain, burning or unusual feeling during sex, everything worked like normal other than the color.

So, if your doctor didn’t warn you, I hope this article gave you an idea of what to expect after a prostate biopsy.  I’m a patient, not a physician, but I can tell you what my doctors told me:

If you develop flu-like symptoms, severe chills or a fever above 100F, call your doc immediately or go to the Emergency Room.

If you are unable to urinate or have foul smelling urine, call your doc immediately or go to the ER.

After the first day or two, if you suddenly have fresh or significantly increased bright red blood or large blood clots in your urine or stool, call your doc immediately or go to the ER.

Here’s another very good guide from a physician’s perspective and also a printable care sheet if the one you received didn’t have the vital information:

Drink lots of fluids, get a lot of rest, follow your doctor’s orders and good luck!