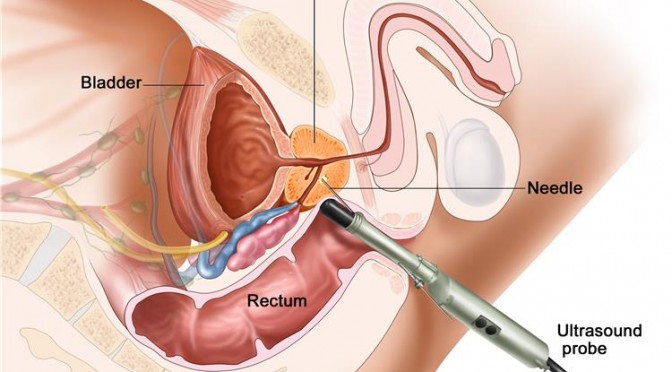 You’ll probably get a care sheet from your urologist.  Maybe you found a website with a list of possible side effects on the internet.  Beyond that, there aren’t a lot of reports with personal experiences from a prostate biopsy.  Probably for obvious reasons.  Most guys don’t want to talk about it.  Some are just too tough or too cool to tell it like it really is.  With a careful Google search, you can find some personal experiences on the procedure.  There are even a few horror stories.  If you’re squeamish when reading about unpleasant medical complications, STOP READING NOW!

According to the link above from the Mayo Clinic, here’s the original summary from 2009 of what to expect:

The first part is pretty much right on the money, in my experience.  It’s that last part that may not be completely accurate.  In fact, a number of respectable institutions fail to mention this issue at all on their information.  Here’s the squeamish part.  A pinkish tint doesn’t begin to describe it.  Initially, we’re talking dark, blood red, as if you have a serious medical problem.  Now, there’s no pain or discomfort involved, the systems works just like normal in that regard, it’s just disconcerting to see it.  Your wife, girlfriend or other woman may not be as sympathetic about this sort of thing as you’d like, given that they have dealt with a similar issue since puberty.  Even so, you should probably consider having condoms on hand and using them.

This may not be the case with all men after a biopsy, but it doesn’t seem uncommon from what I’ve read.  I find it interesting that I wasn’t once told about this possibility and it wasn’t on my care sheet, either.  You’d think they’d at least mention it to avoid getting panic calls from guys who didn’t do a little research before the procedure.  Well, if you’re going for a biopsy, consider yourself warned.  Maybe it won’t happen to you.  I hope not!

Also see my guide for recovery, side effects and complications from my second biopsy, and read the hundreds of comments with personal experiences from other men below.

For those looking for worst case scenarios, like infections or spreading cancer, you can find that too.  These are some of the things that worried me enough to postpone my biopsy in the first place.  Some websites go overboard, perhaps trying to use fear as a motivator to get you to consider their alternatives.  It’s a powerful motivator, but however small, there are some serious risks that should be considered.  For most men, the complications are minimal.  A little pain, some blood and obviously the anxiety of waiting for results.  Nonetheless, I think patients should be made aware of all possible risks so they know if they need medical attention or not.

575 thoughts on “What to Expect After Your Prostate Biopsy?”